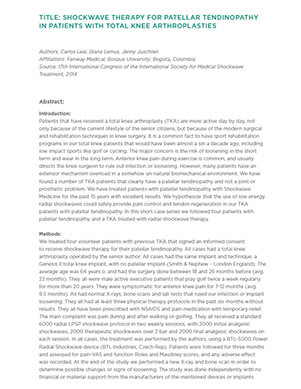 The use of shockwave therapy in this series of patellar tendinopathy patients with previous total knee arthroplasty is favorable.

Patients that have received a total knee arthroplasty (TKA) are more active day by day, not only because of the current lifestyle of the senior citizens, but because of the modern surgical and rehabilitation techniques in knee surgery. It is a common fact to have sport rehabilitation programs in our total knee patients that would have been almost a sin a decade ago, including low impact sports like golf or cycling. The major concern is the risk of loosening in the short term and wear in the long term. Anterior knee pain during exercise is common, and usually directs the knee surgeon to rule out infection or loosening. However, many patients have an extensor mechanism overload in a somehow un-natural biomechanical environment. We have found a number of TKA patients that clearly have a patellar tendinopathy and not a joint or prosthetic problem. We have treated patients with patellar tendinopathy with Shockwave Medicine for the past 15 years with excellent results. We hypothesize that the use of low energy radial shockwaves could safely provide pain control and tendon regeneration in our TKA patients with patellar tendinopathy. In this short case series we followed four patients with patellar tendinopathy and a TKA treated with radial shockwave therapy.

We treated four volunteer patients with previous TKA that signed an informed consent to receive shockwave therapy for their patellar tendinopathy. All cases had a total knee arthroplasty operated by the senior author. All cases had the same implant and technique: a Genesis II total knee implant, with no patellar implant (Smith & Nephew – London England). The average age was 64 years o, and had the surgery done between 18 and 26 months before (avg. 22 months). They all were male active executive patients that play golf twice a week regularly for more than 20 years. They were symptomatic for anterior knee pain for 7-12 months (avg. 9.5 months). All had normal X-rays, bone scans and lab tests that ruled our infection or implant loosening. They all had at least three physical therapy protocols in the past six months without results. They all have been prescribed with NSAIDS and pain medication with temporary relief. The main complaint was pain during and after walking or golfing. They all received a standard 6000 radial LPSP shockwave protocol in two weekly sessions, with 2000 initial analgesic shockwaves, 2000 therapeutic shockwaves over 2 bar and 2000 final analgesic shockwaves on each session. In all cases, the treatment was performed by the authors, using a BTL-5000 Power Radial Shockwave device (BTL Industries, Czech Rep). Patients were followed for three months and assessed for pain-VAS and function Roles and Maudsley scores, and any adverse effect was recorded. At the end of the study we performed a new X-ray and bone scan in order to determine possible changes or signs of loosening. The study was done independently with no financial or material support from the manufacturers of the mentioned devices or implants.

All patients improved pain and function. Three patients improved the VAS score over 50% after one session, and one improved only 26% with an average of 46%. After the first month follow up the average VAS improvement was of 65%, and did not change much, to a 63% and 69% after two and three months. The functional score showed an improvement in all patients. All four had a poor rating at the beginning of the study, and ended with two excellent, one good and one fair rating. All patients revealed satisfaction with the treatment, and a good return to golf with little or no pain during or after sports. No complications or side effects were found or reported by the patients. No X-ray or bone scan changes were found at the three-month follow up.

This is the first report of Extracorporeal Shockwave Therapy for this medical condition. Even though the series is a short one, the results are very encouraging in active patients that had no results with previous conventional treatments. The low energy and the low depth of the radial pressure waves did not cause any damage, symptoms or changes on the implants or the bone-cement-prosthesis interfaces. Our previous experimental studies using high-energy focused shockwaves on an experimental hip prosthesis cemented model did not show any changes in the interfaces. More studies must be performed in order to provide the solid evidence we require as knee surgeons to use this promising procedure as a standard in our
patients.

The use of shockwave therapy in this series of patellar tendinopathy patients with previous total knee artrhroplasty is favorable, has similar results as those found in other patients with the same condition and without a knee implant.