Good results in 84% of the patients 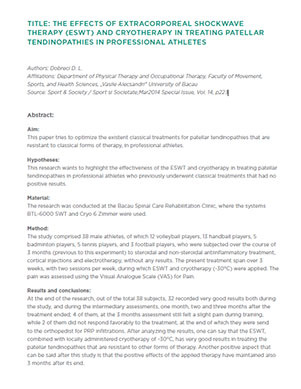 This paper tries to optimize the existent classical treatments for patellar tendinopathies that are resistant to classical forms of therapy, in professional athletes.

This research wants to highlight the effectiveness of the ESWT and cryotherapy in treating patellar tendinopathies in professional athletes who previously underwent classical treatments that had no positive results.

The research was conducted at the Bacau Spinal Care Rehabilitation Clinic, where the systems BTL-6000 SWT and Cryo 6 Zimmer were used.

The study comprised 38 male athletes, of which 12 volleyball players, 13 handball players, 5 badminton players, 5 tennis players, and 3 football players, who were subjected over the course of 3 months (previous to this experiment) to steroidal and non-steroidal antiinflammatory treatment, cortical injections and electrotherapy, without any results. The present treatment span over 3 weeks, with two sessions per week, during which ESWT and cryotherapy (-30°C) were applied. The pain was assessed using the Visual Analogue Scale (VAS) for Pain.

At the end of the research, out of the total 38 subjects, 32 recorded very good results both during the study, and during the intermediary assessments, one month, two and three months after the treatment ended; 4 of them, at the 3 months assessment still felt a slight pain during training, while 2 of them did not respond favorably to the treatment, at the end of which they were send to the orthopedist for PRP infiltrations. After analyzing the results, one can say that the ESWT, combined with locally administered cryotherapy of -30°C, has very good results in treating the patellar tendinopathies that are resistant to other forms of therapy. Another positive aspect that can be said after this study is that the positive effects of the applied therapy have maintained also 3 months after its end.