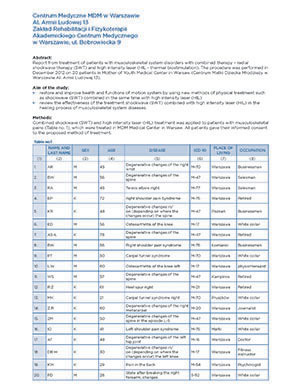 Using the combined therapy of Shockwave and High Intensity Laser at the same time provide significantly better results than using those methods separately.

To restore and improve health and functions of motion system by using new methods of physical treatment such as shockwave (SWT) combined in the same time with high intensity laser (HIL). Also review the effectiveness of the treatment shockwave (SWT) combined with high intensity laser (HIL) in the healing process of musculoskeletal system diseases.

Patients in the treatment period did not use medication or other methods of physical treatment. Based on previous reports and recommendations of the manufacturer, the treatment was performed directly on the clean body around the pain source in the working field of 10–25 cm2. BTL-6000 High Intensity Laser was used to perform high intensity laser therapy and BTL-6000 SWT Topline was used to perform shockwave therapy. First shockwave therapy was applied on a patient and after few minutes brake high intensity laser therapy was performed on a patient. Each session was repeated twice a week. Every patient participated in 3 up to 6 sessions.

The study showed clear evidence and proved that combined therapy is very efficient and brings a strong analgesic effect during the treatment of musculoskeletal disorders. Before treatment, 41% of patients reported pain issues (from 5 to 9 in VAS) while nobody was pain free. Right after treatment, during “at rest” moments 65% of respondents declared their status as painless or slightly painful (from 0 to 1 in VAS). This trend remains the same after 6 months (0 in VAS – 41%, 1 in VAS – 23%).